Difference between revisions of "Sprites"

All objects with an animation are referred to as sprites. A sprite is a picture sheet with all the frames needed to be displayed in an animation. In Open Surge, a sprite is composed by two things:

Let's see how Open Surge reads data from your images so that it can be displayed in-game. We will look at the ring sprite file included with the game (sprites/rings.spr).

Now that we've examined a sprite file and determined what each of the components do, we'll modify it so that we replace the standard rings in the game with our own.

Warning: Changing sprite files makes a major change to the game. Make sure to backup your sprite files before you change them, so if something goes wrong, you will be able to restore the original functionality to the game. 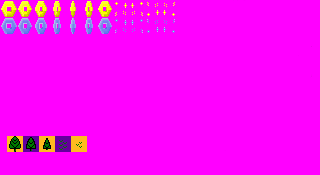