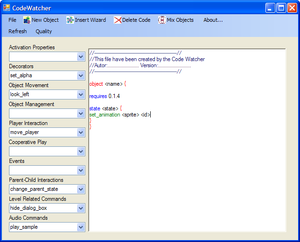 CodeWatcher is an independent software written by TheSeventhEmerald, a member of the Open Surge community.

Usually one creates custom objects for the Open Surge Engine using a simple text editor. CodeWatcher is a program that lets you create objects in an enhanced environment. According to its creator, CodeWatcher provides the following features:

At this time CodeWatcher is only available for Microsoft Windows.