Character files are human-readable configuration files located in the characters/ folder. They have the .chr extension. These files are used to specify the properties of the characters.

Each level has one or more playable characters. You can select which characters appear in which levels.

Character files are used to specify the following data:

The example above has been simplified for the purpose of explanation. The actual character file of Surge has some additional things in it.

Compatibility notes: animation charging, sounds charge and release, the abilities block, as well as some multipliers (indicated above) are available since Open Surge version 0.5.0.

Companion objects: companions is available since Open Surge version 0.5.0. It is followed by one or more names of objects surrounded by double quotes ("). These objects should be created in SurgeScript. In older versions of the engine, you'd write companion_object instead (it supported only one companion).

Playing as the character

Save the file and open the level. You should see two playable characters appear in the level. For more information, refer to: Level specification - players.

One of the exciting features of Open Surge is the possibility to create custom abilities (custom moves) for your characters. You can create these abilities by adding companion objects to your characters. These objects are created in SurgeScript.

To understand better how to create your own custom abilities, let's study the case of a dash movement (affectionally called "Super Peel Out"). If your character is endowed with that ability, you can give it instant speed when it's stopped. In Open Surge, character Tux features that ability. Surge does not. To add this custom move to Surge, add the corresponding object to his companions:

The new companion is defined in a script, a .ss file located in the scripts/ folder. Writing new scripts is beyond the scope of this article, but the script of this move has been reproduced here for clarity (do not copy and paste it - it's already shipped):

What custom abilities can you add? Whatever you can imagine! Swimming, flying, climbing, wall kicking, you name it! The sky is the limit for those who learn SurgeScript! 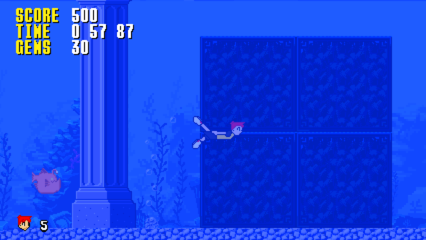 Swimming in the game Speedy the Rollerskater

We now present Speedy the Rollerskater, an original character created by community member Synfigmaster91. In addition to the basic abilities of braking, rolling, etc., Speedy has a special ability of his own: he can swim. The following files are relevant to this character:

Even though Open Surge provides built-in 360º physics (with curvy roads, loops, and so on), careful modification of the character files can make it behave like a regular platformer. Example: if you create a character named SuperTux without the special abilities listed above (rolling, charging, etc.), set its slope multiplier to zero (and adjust the others), as well as build levels mainly out of rectangular platforms, you'll end up with a platformer like SuperTux. Additionally, companion object "Lock Angle" prevents the character from rotating on slopes. 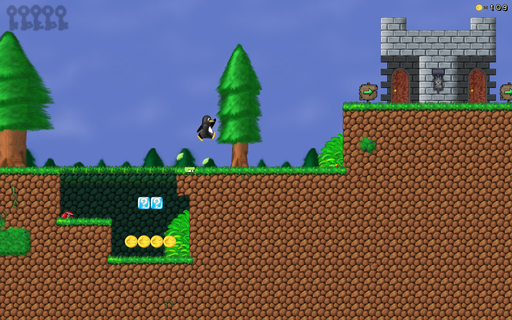