The legacy scripting system has been replaced by SurgeScript.

This section is deprecated due to newer versions. We ask that you don't use the information provided in this section, but read up on the most recent information available on this wiki or in the forum.

Objects are elements that allow users to greatly extend the original Open Surge Engine. They are entities that can be put in levels and that can interact with the player in a way that is specified by the user. This interaction is specified in a text file containing commands.

Objects are composed by a script (an .obj file), a sprite (an .spr file), an image and optionally by sound effects and other resources. Objects can be made by you or by other people. You can download extra objects at the community forums. They usually come in a package (like a .zip file), and installing them is as simple as placing the files in the right folders (example: moving the .obj file to the scripts/legacy/ folder, the .spr file to the sprites/ folder, the .png file(s) to the images/ folder, and so on).

The possibility of creating objects was introduced on version 0.1.4 of the game engine.

This page focuses on the basics of developing object scripts. We assume the reader already knows how to script sprites (i.e., .spr files located in the sprites/ folder).

Object scripts are .obj files located in the scripts/legacy/ folder. Every object described in an object script will be available on the built-in level editor.

Definition
A Decorated State Machine (DSM) is a mathematical abstraction that can be used to describe the behavior of objects. It is composed by a finite number of states and by transitions between these states. Each state can be decorated with decorators, which are actions that the object must perform, or events that it must detect. Only one state can be active at a time, and the initial active state is called "main". 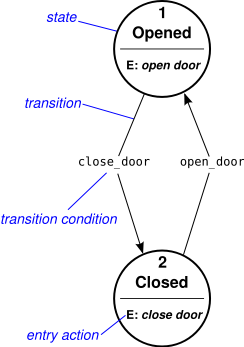 Example of a state machine

That is said to be an informal description of the problem. We need to transform it in something more rigorous. What is a door? We'll show one solution here, but it is not necessarily unique.

A door has two states:

If the door is closed, then we associate the following decorators to it:

Conversely, if the door is open, we shall associate the following decorators to it:

You may notice that events have a condition and a transition. For any event, if its condition holds true, then its transition will be activated (i.e., the state of the object will be changed). Decorators specified after an event will not be evaluated if the event holds true.

Definition
A state is composed by a name and by a sequence of decorators.

Definition
An object description is composed by a name, by zero or more properties and by one or more states.

Definition
An object script is a .obj text file located in the scripts/legacy/ folder that contain one or more object descriptions.

Here's an example of an object script: (comments start with // and end with newline; comments are not taken into consideration when the engine reads the scripts - they're just there for human readability)

Hopefully this is simple to understand. We can simplify the script to:

Note: if you want to try that object out, please note that the "Power Ring" sprite does not exist by default on the game. You may replace it by SD_BLUERING, for example. Please take a look at the Sprites page if you haven't yet.

How does one know the list of available decorators and their syntax?
By checking the API Reference.

How can I transform my idea into a decorated state machine (DSM)?
This process is called modelling, and this is the whole challenge. There's no "right" or "wrong" answer - how you're going to do it is entirely up to you. You may want to take a look at the Case studies for inspiration.