This article needs a revision, as some items have been deprecated or changed over time.

Our goal is that this game becomes fun, popular and widespread. It should work on both old/slow and recent/fast computer hardware, and it should also work on diverse operating systems (like Windows and GNU/Linux). The download should be small, so that people with slow connections can play the game as well. It includes retro graphics.

It's also of our best interest that users keep playing Open Surge after they have cleared the regular levels. In order to achieve that goal, we provide a level creation mechanism: players are able to create their own levels using the level editor. As Open Surge features a flexible engine, players can also modify it in order to make their own games.

This simplified design document covers the 1P Game mode and it reflects our vision of what the game will look like on version 1.0.

Long time ago the ancient gods have created a sacred and powerful item, the Dimensional Scepter. This scepter grants ultimate power to anyone who possesses it, and since it can be very dangerous in the wrong hands, the gods have hidden it in the Dimensional Gate.

Gimacian the Dark is an evil wizard who needs darkness to increase his powers. He knows where the Dimensional Gate is located and he will try to open it using the Dimensional Rings. If he gets that power, he will rule the universe, and nothing will be able to stop him. Surge and his friends must prevent Gimacian the Dark from opening the gate, or existence as we know it will be over!

This is the regular 1-player mode, where the user has to get through a sequence of levels in order to clear the game. The game will save the progress of the player automatically.

The tutorial teaches the player how to play (interactively). It shows the basics of the cooperative play and the individual abilities of the characters. There's no save-progress feature.

A quest is a series of levels. Regular users are able to create levels as well. The game will save the progress of the player automatically.

The game may be played using the keyboard or a joystick. Default keyboard mapping:

This character has control over lightning that can affect certain objects in different ways.

This character can fly using a jetpack.

This character can climb up walls and hang on to ceilings.

An evil wizard who wants to transform the world into pure darkness in order to become the absolute ruler.

Throughout the game, you'll find special items which will be helpful in your quest against evil. Most of the items are contained in item boxes. To pick an item from an item box break open the box a spin attack or by jumping on it. Other items you just collect by touching them.

These are the main items, that can be found through the game. There are, however, other level-specific items which are not listed in here.

Batteries represent power. They are collectible items that keep you from getting hurt if you are attacked. When you get hit, you lose your power. If you have no power when attacked, you will lose a life. On the other hand, if you manage to collect 100 batteries, you'll win an extra life! 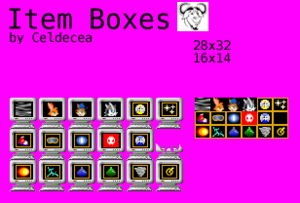 Increases Life Count by 1 point. The box differs depending on your current character.

Smash the box to get 10 extra batteries.

Smash the box to become invincible to attacks and traps for a few seconds. However, if you fall to a bottomless pit, remain underwater for too long, or be crushed between two moving bricks, you'll lose a life!

Increases your speed for a few seconds.

Smash the box to get a protection shield. The shield will defend you against one extra hit.

Smash the box to get a fire shield. This shield protects you against fire objects and regular hits.

If you smash this box you'll be hurt and lose your batteries. If the player has no batteries, he/she dies.

Little animals appear when an enemy gets killed. A group of them also appear when you break the Animal Machine at the end of a level.

Note: use open source mascots such as Tux and Wilber as the little animals.

Spring pads come in three colors and, when the player touches them, they will catapult the player at different levels of power (which affect resulting player speed): yellow (weak), red (medium) and blue (very strong). They come in eight directions: Up, Down, Left, Right, Up/Left, Up/Right, Down/Left, and Down/Right 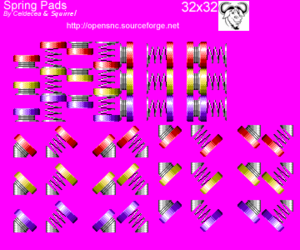 Activates a teleporter or opens a door. Its behavior depend on which object is closest.

Players can't get through doors, unless somebody is stepping on the closest switch. Some doors only open if the appropiate color related switch is pressed. 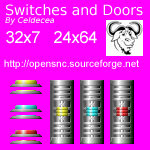 Once activated, teleports the entire team to the same spot. 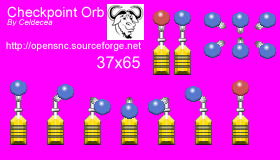 Touch it to clear the act. It's placed after Acts 1 and 2.

Break it (attack it three times) in order to clear the zone. It appears after the player beats the boss in Act 3.

The player bounces back as a result of interaction with these objects. 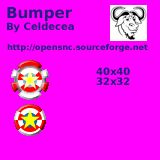 Can be found laying on the floor or stuck on ceilings and walls. If you touch the spiky surface of the spikes you'll get hit. If the player has no power, he/she dies. Spikes may occasionally hide itself from the player's view and come out at certain intervals.

Each player has his own DNA Door, easily recognizable by the door's colors. Orange DNA Doors for Surge, brown for Neon, and grey for Charge. No players can go through these doors except for the designated player the doors are assigned to. These doors are available in both horizontal and vertical positions. 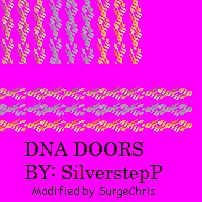 The levels are designed in order to explore both cooperative play and the individual abilities of the characters. Unlike most similar platformers, this game provides a greater level of interaction between the player and the levels. It's more than just a jump'n'run, as the user must come up with some strategy in order to get through the levels.

This is the list of planned levels. Please note that not all of them have been designed yet.

The levels below are as they appear in the game's current storyline. These are subject to change.

The first level is very easy to get through. It's bright, cheerful and filled with scenery. It has areas that are wooded, and clearings, so the player can see the background.

This level takes place on a massive dam. Water is gushing around the player, and there are tanks of water. This introduces underwater gameplay.

Combines elements from Speed Slider (from Knuckles Chaotix) and Rainbow Road (from Mario Kart 64), adding some original ideas as well. This level is more about racing/running than it is about strategy.

A forest where many of Gimacian's creatures reside. "Charge" the Badger is being held captive here.

A city covered in ice, due to Gimacian.

A level located in the middle of City Chill zone, that seems to stand out from everything else. Music notes are everywhere.

Sand area. This is the habitat of dangerous dragons under the control of Gimacian, which are holding Neon captive.

A sacred and hidden temple, in a cave setting. Water appears here, and this serves as the 'hard' water level.

This is the place where springs are made. In reality, it is secretly building Gimacian's ultimate weapon underground.

A rename for Melted Metal zone. A level filled with dangerous creatures digging out the supplies for Gimacian's Sky Fortress. The Sky Fortress can be seen in the background.

Gimacian's ultimate weapon to take over the world. Unlike other zones, this one only has two Acts.

This level will be available only if the player gets the 8 Dimensional Rings.

This level will be available only if the player gets the 8 Dimensional Rings. This is the game's true final boss. It will involve all three characters getting their own part in the battle.

Go to: How to make a level

Go to: Introduction to Modding