Bricks being displayed in the level editor

In Open Surge, levels are built using elements called bricks. A brick is a reusable scenery element. Bricks may be: blocks, floors, walls, ceilings, movable platforms, trees, plants, decorative objects, and so on. Bricks are like tiles, but more flexible:

Bricks are imported into Open Surge via a brickset. If you want to create new scenery for new levels, you must first create a brickset. A brickset is composed of two elements: 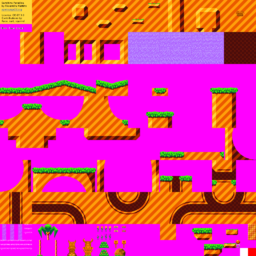 No brickset would ever exist without the image in which the bricks are contained. This image features the artwork and may be organized in many ways. It's recommended to align the bricks to a 16x16 grid. This makes things convenient when designing levels and when creating the brickset script.

Note: to ensure maximum compatibility with most video cards, brickset images must not exceed 4096x4096 pixels. That's more than enough for most cases, but if you ever run out of space, split the artwork into two or more images.

The brickset script specifies how the bricks get put into the game for your use. It connects the artwork with the game. A brickset script is a .brk file in the themes/ folder. The engine reads this script for references on bricks, gets their parameters, and the physics take care of the rest once you're done placing the bricks in your levels.

The brickset script contains references to the brickset image(s), how big the bricks are, what part of the image to use as their "face", the animation sequence (if any), the collision mask (if any), and their behavior: whether they react as a plain stepping stone, collapse beneath you once touched, act as a "cloud" (we will discuss this soon), move around in mid-air to make jumping challenges, and so on.

Brickset scripts can be written manually or can be generated automatically using tools. Read section Using automated tools for details. 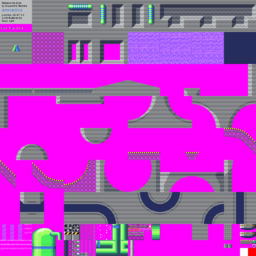 A brickset created using these guidelines 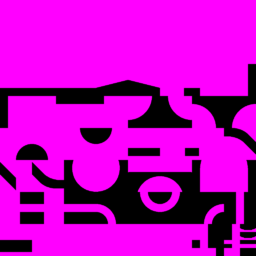 Collision mask of a brickset

While you have great flexibility to design your brickset, experience shows that certain approaches work better than others. We present guidelines that increase the likelihood of creating a brickset that easy to use and easy to write.

Divide the brickset into 3 parts (this division is conceptual):

These are 128x128 bricks that represent: walls, platforms, ceilings, parts of a loop, and so on. They are the building blocks of your level and will help you build its structure. Make sure that they are tileable (repeatable).

2) Things (you may use bricks numbered from 128 upwards)

These are generally passable/decorative bricks like: flowers, trees, rocks, pipes, and so on. All such bricks must be built within a 16x16 grid (width and height must be divisible by 16, like 64x64, 32x64, etc.)

3) Special (you may use bricks numbered from 255 downwards)

These are special bricks such as: movable platforms, breakable walls, and so on. All such bricks must fit a 16x16 grid (width and height must be divisible by 16).

Imaging software (such as GIMP) have the ability to work with grids. Enable the 16x16 grid in your software. Activate the option snap to grid, so that your grid becomes "magnetic". Create a separate grid of 128x128 pixels by making a custom image and display it on top of your brickset - in a separate layer - while you're working on your art.

In addition to the artwork, you may specify a collision mask: an image that specifies the solidity of each pixel of the bricks. A collision mask gives you a finer amount of control regarding how the collisions should be handled. Sometimes collisions require manual inspection, so it's better to create a mask.

How to create a collision mask

Art and collision mask are split into different files. Once the artwork is ready, the mask can be created easily by copying the image and deciding which parts are solid and which aren't. A mask has two basic colors: magenta means non-solid. You may use black as solid. Artwork and mask must be aligned (share the same position in the image).
Collision masks must be smooth and should have no "holes" in it (see the example on the side). Pay attention if your artwork is irregular: in this case you need to adjust the mask. Examples:

1. if you have a grass brick with lots of "spikes" on top of it, smooth it out: you don't really want "spiky" artifacts affecting the collisions.
2. if your artwork includes metallic grids or other features with holes in them, fill in the gaps: these artistic features must not affect the collisions.

Creating new scenery implies creating new artwork. You may create the artwork yourself, work with an artist, or find it online. There are many pixel art tutorials on the Internet, and OpenGameArt.org provides freely licensed art that you can use and remix.

When creating your artwork, you may find inspiration in the artwork that is shipped with Open Surge (explore the images/ folder). You can use that as a base to help you get started with your own artwork.

When it comes to generating brickset scripts, you can either write them manually or use automated tools to do the job. The Quick Brickset Editor lets you quickly create bricksets. Also, although written some years ago, JBlocks or the Brickset Editor Tool can still be used today.

A brickset script is a text file that has one or more brick definitions.

In the brickset script, every brick definition starts with brick and is followed by its number. Following a logical sequence is highly advisable. After the brick number comes a block containing a set of parameters that describe what the brick is.

The sprite block describes the graphical properties of the brick - how it's going to be displayed on the screen. For more information, read the Sprites page.

The type will tell the physics core how to handle collisions with this brick. 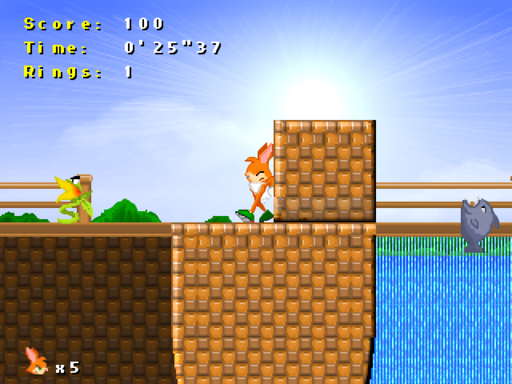 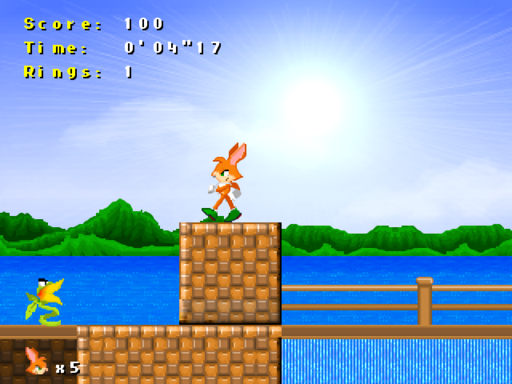 You can't go through it

Note: in versions of the engine prior to 0.5.0, the solid brick type was called OBSTACLE.

PASSABLE means: you can pass through it (it's a non-solid brick, meaning that it doesn't affect collisions) 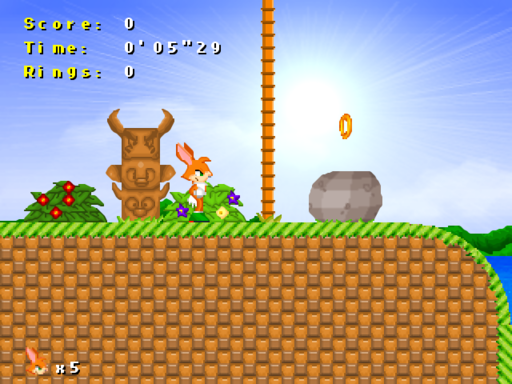 The bushes are passable bricks

CLOUD means: you can go to the top of it from below, but not the opposite. Also known as "one-way platforms". 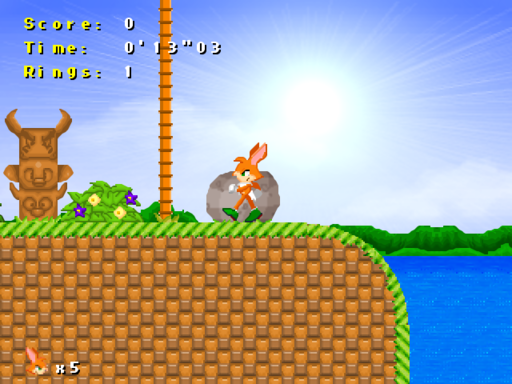 The rock is a cloud brick

See? You can step on top of it 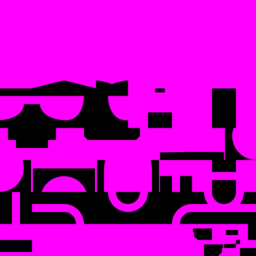 A collision mask is a mechanism that specifies which parts of the bricks are solid and which parts aren't. This gives you a finer amount of control regarding how the collisions should be handled. Example: if you have a "grass" brick with lots of "spikes" on the top, most likely you don't want the "spiky" artifacts to affect the collisions. Collision masks must always be smooth and should not have any "holes".

This is an optional parameter. If not specified, the engine will assign a collision mask automatically: pixels will be solid if they are not transparent (magenta). Depending on your artwork, this may not be desirable, so creating your own mask is a good idea.

This is an optional parameter. If not specified, it defaults to 0.5.

The behavior specifies the kind of movement or behavior the brick will adopt.

DEFAULT means: a brick that stands still, with no special behavior. This is the behavior that is likely to be used in most cases. Example:

The syntax above shows just the type and the behavior of a brick; a more complete brick definition would be as follows:

FALL means: the brick will collapse and be destroyed upon being stepped on. Example:

An optional orientation parameter may be specified: 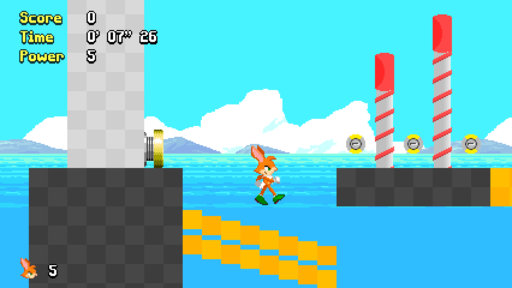 BREAKABLE means: the player can destroy the brick by rolling on it. Example: 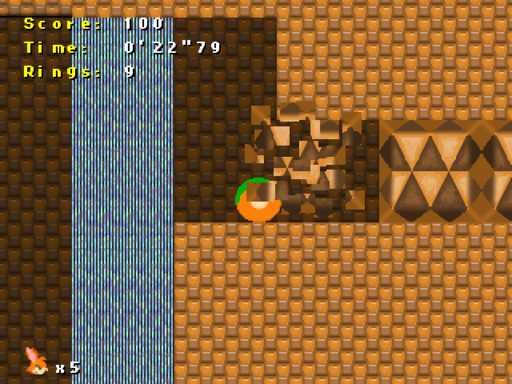 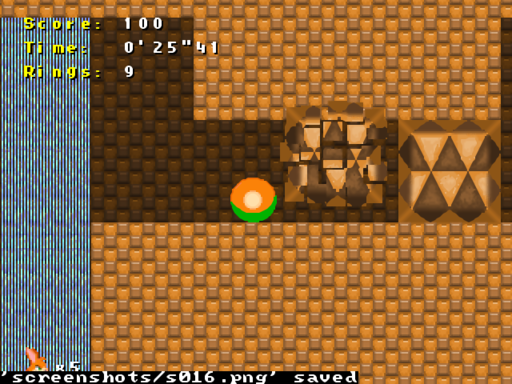 SMASHABLE means: a brick that can be smashed when the player jumps on top of it. Similar to BREAKABLE.

Note: the SMASHABLE behavior was added in Open Surge 0.5.0. 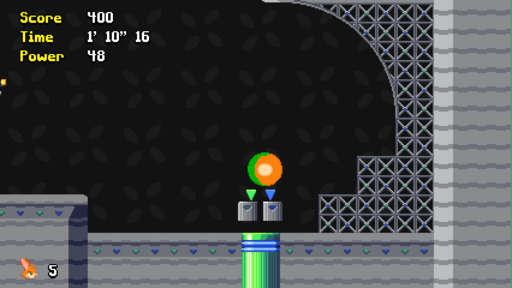 FLOAT means: a brick that goes slightly down when the player steps on top of it. An optional modifier parameter may be specified:

Note: the FLOAT behavior was added in Open Surge 0.5.0. 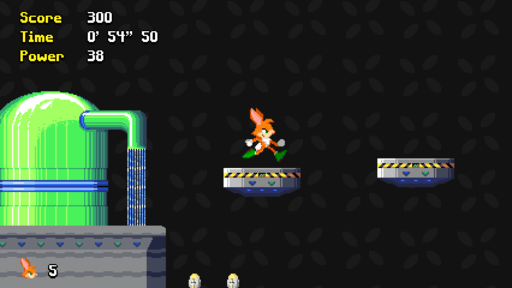 CIRCULAR specifies a movable platform that moves along an ellipse. 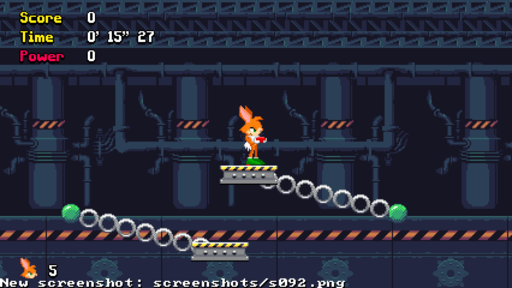 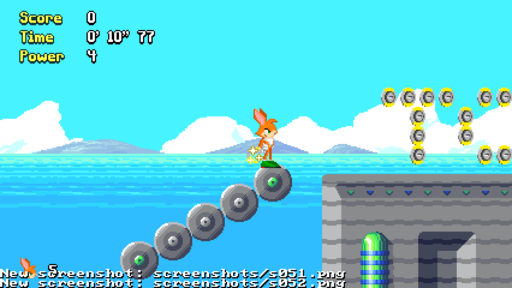 PENDULAR specifies a brick that swings like a pendulum.

Note: the PENDULAR behavior was added in Open Surge 0.5.0. 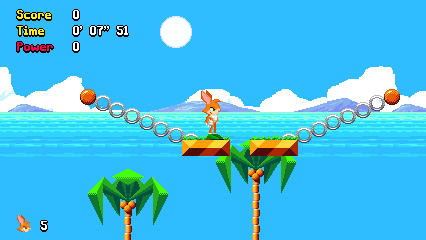 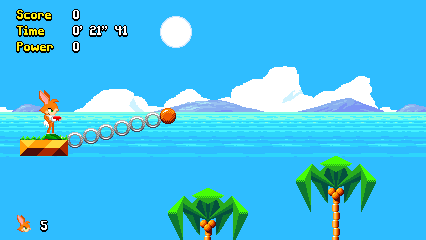 Can you see it?

A MARKER is a brick that is only rendered in the editor. Used to complement collisions.

Note: the MARKER behavior was added in Open Surge 0.5.0.

The "angle" parameter is deprecated and should no longer be used. It's ignored by current versions of the engine. If, however, you're using a legacy version of Open Surge (0.2.0), then this information still applies. In this case, though, you're strongly encouraged to upgrade.

Previous versions of Open Surge used a parameter called angle. The angle told the system whether the brick was a floor, a wall, a ceiling, or a slope. 0º was usually flat ground, 90º a right wall, 180º a ceiling and 270º a left wall. Anything in between these values were slopes. 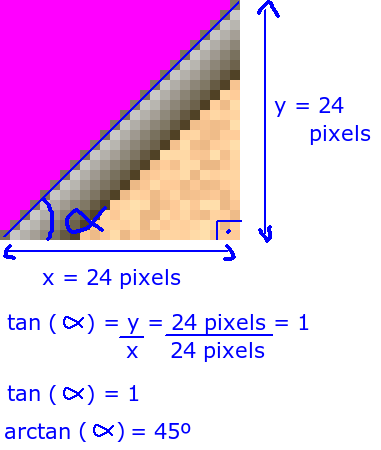 As you can see, the angle was measured from the positive x-axis. A plain floor would have 0 degrees. Simple walls/blocks (on which the player can't run through them, vertically) also would have an angle of 0 degrees. For slopes such as the one displayed on the picture above, function atan2(y,x) would give the angle.